Art through the Eyes of the Soul 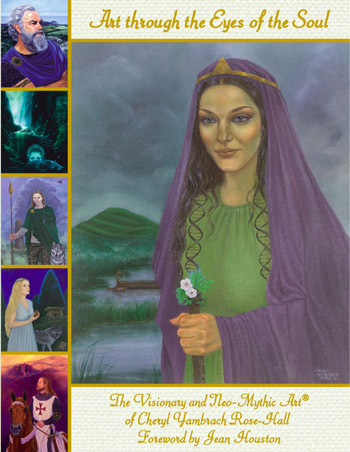 In Art through the Eyes of the Soul Cheryl Rose-Hall shares the unique painting technique that she has developed. As a sensitive, she shares how she paints by attuning to her subjects through the eyes and spirals out from that central point. Using historical data along with her psychic impressions, she creates empowered works of art based on sacred sites and their mythology.

Art through the Eyes of the Soul includes photos, images, and research that the public has never seen before. The book is divided into the four mythic lands where Cheryl lives and creates. Narnia (Northern Ireland), Lemuria (Mount Shasta), Avalon (UK), and Bohemia (Prague, Czech Republic).

There are 120 colour photos and 60 colour paintings and their stories. Some of the highlights include The real portrait of Mary painted by St. Luke, the actual Kingdom of Narnia, and the rarely seen ancient Lemurian petroglyphs near Mount Shasta documented by archaeologists.

Cheryl is a portrait painter, visionary artist, and researcher. Using historical data along with her psychic impressions, she creates empowered works of art based on sacred sites and their mythology, creating a new genre Neo-Mythic Art.


Art Through the Eyes of the Soul Oracle Cards

This oracle deck is a vehicle to provide personal intuitive guidance from the mythic beings and Divine entities that inhabit sacred sites and spaces. Deep insights and profound answers are hidden within the paintings. Meditating on a card image connects you into the energy field of the location where the painting was conceived. 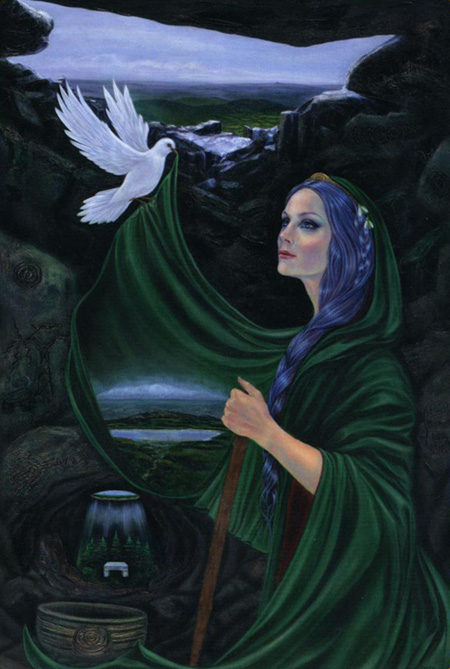 From the earliest times, the Cailleach has been venerated as a mother Goddess of Ireland. In this painting, she is seen in her ancient cairn on Slieve Gullion, in County Armagh. On the horizon can be seen the cairn topped hills of Slieve na Cailleach, at Loughcrew, Oldcastle, County Meath, which are also named in honor of her.

Sharing the top of the mountain close to the cairn is the magical Lake of All Healing. Around her cairn walls are glyphs both ancient and modern, depicting both the glory and destruction of nature. Aroused by the needless desecration of her primal landscape, she cautions against the folly of the proposed power lines through counties Sligo and Roscommon.  More ... 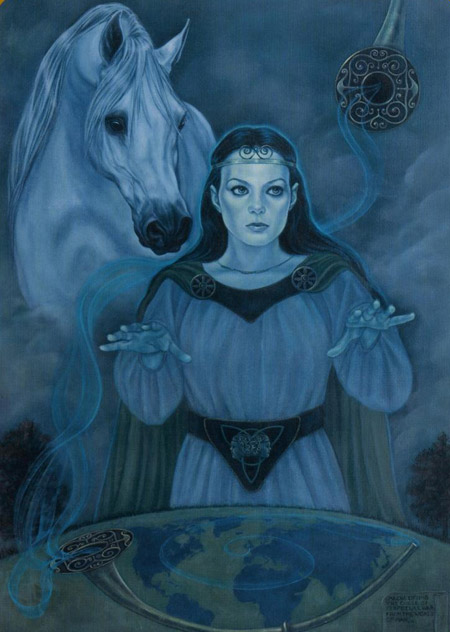 Macha lifting the Curse of War from the World of Men. In the Irish myth, Macha, a faery woman, was forced to run a race against the king's horses while she was nine months pregnant. She wins, collapses, and gives birth to twins. Before she dies, she curses the men of Ulster - saying that when they go into battle, the men would become as weak as a woman in labor.

Then she dies. In Cheryl's painting, she is not only lifting the original curse on the men of Ulster but now also the "curse of war" from the world of Man.  More ... 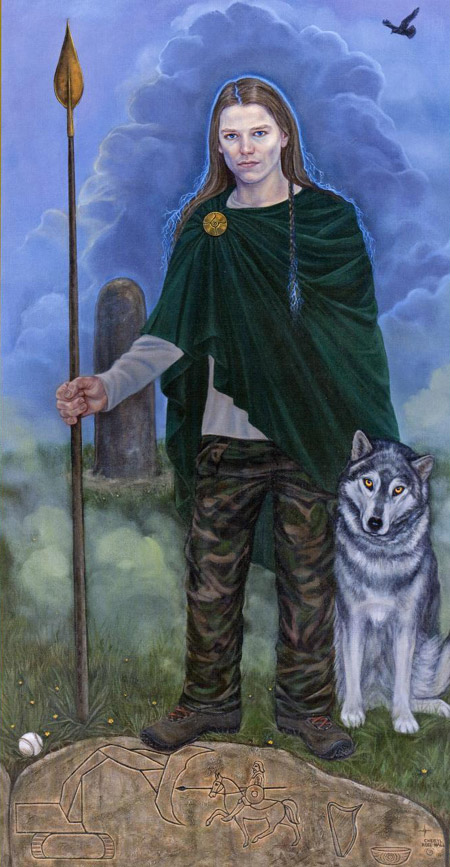 In the painting The Return of Setanta, he has come back as a more evolved hero and eco-warrior, having made peace with the dog who is now his shamanic friend. He has returned to protect the ancient centre of Tara and Lia Fail (the Stone of Destiny) from the motorway that is currently cutting through the sacred landscape.

Just as in the legend, lightning comes out of his hair. The glyphs in the rock below his feet show an ancient Celtic warrior pointing his spear at the digger to protect the treasures of Ireland. This is the Neo-Mythic' aspect to the story, showing the possible future history carved in stone. After years of painting these images, Cheryl read that the Shankhill / Newtownards murals are being painted over and replaced with more positive messages!  More ...

Clearly, Cheryl Rose lives in the unobstructed universe where the categories of time are strained by the tensions of eternity and where myth and magic, metaphor and metaphysics dwell together in a Peaceable Kingdom.

Her visionary art is a luminous portrayal of that which never was but is always happening. Things of nature, sacred sites and even people’s faces become transparent to transcendence under her artful brush. Her accompanying words evoke the mysteries which dwell beneath the surface crust of everyday consciousness, yielding a poetic science of deep seeing. And what she sees is the multidimensional world where numinous borderline persons reveal the symbols and the stories of those who would enter a reality larger than our expectation and more complex than all our dreams.

She travels both inward and outward worlds, a pilgrim of possibilities known in both once and future times. Whether she evokes a mythic Irish hero or consorts with faeries in a ritual landscape, reveals the secrets of Shasta, or gives spirit to hidden valleys, Cheryl Rose restores the mythic fabric that had been torn in modern materialism. Ancient knowings, tales of wonder emerge on her canvas to speak to our time in evocative new ways. Thus, her emphasis on neo-mythic art. In this she is prescient of the deepest happenings of our era. For all over the planet, what had been hidden in the collective psyche is now emerging, more festive and feisty than ever. The questing journeys of millions of seekers in the current spiritual renaissance are sourced in this collective rising.

Saint Francis once said that “what we are looking for is Who is looking.” Perhaps, it is our innermost psyche, the nature that lies within, the inner mirror of Great Nature which has pushed the universe at large along on its evolutionary journey that is the "Who" calling us to be more than we ever thought we could be. And Nature Herself, wounded, disconsolate, in grave danger everywhere calls for Her bards and artists, those who have the means and skills to tell Her truth and Her trauma, Her needs for Her healing.

Cheryl Rose is one of these. Myth teller, symbol carrier, Earth agent, and keeper of the Dream, she gives us of her visionary genius in this extraordinary book of revelations. For herein, eyes are unsealed, ears unstopped, hearts are opened and we join our birthright as mythic beings who must work together to make the difference lest we lose our precious planet.

These are the times, and we are the people. 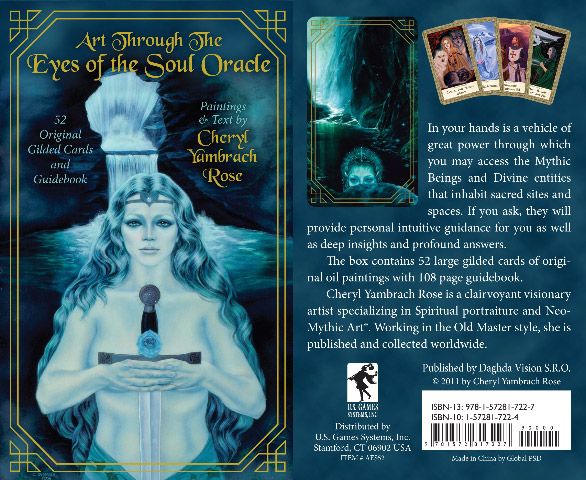