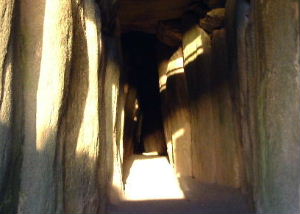 Newgrange is best known for the illumination of its passage and chamber by the winter solstice sun. Above the entrance to the passage at Newgrange there is a opening called a roof-box. This baffling orifice held a great surprise for those who unearthed it. Its purpose is to allow sunlight to penetrate the chamber on the shortest days of the year, around December 21, the winter solstice.

At dawn, from December 19th to 23rd, a narrow beam of light penetrates the roof-box and reaches the floor of the chamber, gradually extending to the rear of the passage. As the sun rises higher, the beam widens within the chamber so that the whole room becomes dramatically illuminated. This event lasts for 17 minutes, beginning around 9am.

Newgrange's accuracy as a time-telling device is remarkable when one considers that it was built 500 years before the Great Pyramids and more than 1,000 years before Stonehenge. The intent of its builders was undoubtedly to mark the beginning of the new year. In addition, it may have served as a powerful symbol of the victory of life over death.

Each year the winter solstice event attracts much attention at Newgrange. Many gather at the ancient tomb to wait for dawn, as people did 5,000 years ago. So great is the demand to be one of the few inside the chamber during the solstice that there is a free annual lottery (application forms are available at the Visitor Centre). Unfortunately, as with many Irish events that depend upon sunshine, if the skies are overcast, there is not much to be seen. Yet all agree that it is an extraordinary feeling to wait in the darkness, as people did so long ago, for the longest night of the year to end.