Newgrange and the Bend of the Boyne 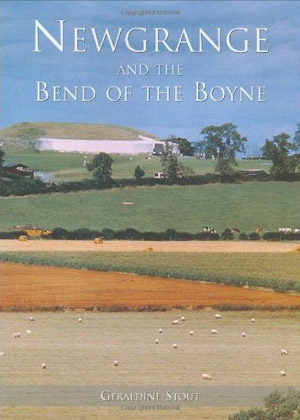 Newgrange and the Bend of the Boyne by Geraldine Stout is a wonderful 236 page historical geography of the Boyne Valley covering 7000 years, from prehistory to the twentieth century. The megalithic mounds at Newgrange, Knowth and Dowth are extensively covered.

Newgrange and the Bend of the Boyne is the exploration of an outstanding archaeological landscape centered on Newgrange Passage Tomb and its greater environs. In ancient times it was called the Brugh na Boinne. Today this area is designated as a World Heritage site and is Ireland's first protected Archaeological Park. Its rich fertile soils and south-facing slopes are set in County Meath in the most accessible, low-lying part of Ireland, close to the Irish Sea.

This is where the great pre-historic tomb-building tradition of Atlantic Europe reached its zenith. It is where legend says the foundations of Irish Christianity were laid and is also the home of Ireland's first medieval Cistercian monastery at Mellifont. On the banks of the Boyne in 1690 one of the most important battles in Irish history was fought.

The Bend of the Boyne had a pivotal role to play in Irish history and this is evident in its abundant physical remains, which can be traced among its fields and riverbanks. Through the interpretation of these remains this book presents an understanding of how this landscape was organized and exploited by communities over seven thousand years of settlement. This book draws heavily on the results of an extensive program of excavation at Knowth, Newgrange and Monknewtown and archaeological survey, which has greatly increased our knowledge of prehistoric societies. Using a wide range of maps, color photographs and historic as well as new drawings, it traces the gradual evolution of the landscape to the present day. Newgrange and the Bend of the Boyne is also concerned with the future of this protected cultural landscape and recommends actions to ensure its protection and preservation.

Geraldine Stout is an archaeologist with the Archaeological Survey of Ireland, Department of Arts, Culture and the Gaeltacht. She assisted on the excavations at Knowth and Newgrange and has undertaken postgraduate and doctoral research on the Boyne valley.

During last summer, in a field in the Boyne Valley, archaeologist Geraldine Stout and her team unearthed a rare gold artefact. It turned out to be part of a brooch dating from the Anglo Saxon period, and was yet more evidence of the rich and varied history of the Brú na Bóinne area.

The gold was found at a ringfort near Knowth, and the dig undertaken by Dr Stout was the latest in a series of archaeological investigations in the Boyne Valley in which she has been involved. Previously, she had worked on excavations at the great passage mounds at Newgrange and Knowth, and in 1991 she was the author of an extensive paper on the henge monuments of the Boyne region.

Her immense experience as an archaeologist and her extensive knowledge of the landscape of the Boyne Valley is brought to bear in what is her largest printed work to date – the book “Newgrange and the Bend of the Boyne” – which has just been published by Cork University Press.

Dr Geraldine Stout knows every field in the Brú na Bóinne heritage area like the back of her hand.

And she is very familiar with the long, varied and rich history of Ireland’s most important heritage area, from the primitive days of hunter gatherers in the Mesolithic, through the glorious mound-building phase of the Neolithic, through the great ceremonial and monumental Bronze Age, on into the turbulent Iron Age, and then beyond into ‘history’, and the arrival of Christianity, the Anglo Saxons, the Vikings and the Normans, and the legacy of the great farming community of the Cistercians at Mellifont, and even the crucial battle in the shallow waters of the Boyne in 1690 which pitted Jacobite against Williamite in the fight which would forge Ireland’s political fate.

For this is just a glimpse at the huge breadth of the history of the Bend of the Boyne, and is a mere summary of the many subjects touched upon in Dr Stout’s remarkable work.

Here is an author who draws on many sources, academic and non-academic, archaeological and non-archaeological, embracing the artistic, poetic, literary, and creative ideologies of the people she has met on her journey, who, like her, share a love for the Boyne and its history.

One of the most impressive aspects of ‘Newgrange and the Bend of the Boyne’ is its tremendous visual impact. Before we even get to the opening words of the first chapter, there is a huge two-page map detailing all the sites, ancient and historic, in the area.

The text is complemented at all times by a rich wealth of visual aids. There are wonderful photographs, including stunning aerial shots from the Dúchas archives along with pictures from inside Newgrange, Knowth and Dowth, photographs of finds and artefacts, and a host of others from pictures of Boyne curraghs to Boyne battle graves and wooden penal crosses.

The whole volume is enriched with a vast array of maps and illustrations, which were prepared by Geraldine’s husband, Matthew Stout. At all times, even to those wholly unfamiliar with the territory and subject matter, the visual aids are hugely helpful and give the reader a good sense of direction.

‘The Bend of the Boyne’ is a breath of fresh air in terms of its appeal. The text, although written by an archaeologist, is obviously aimed for the general reader. It is light enough to be understood by most people, and heavy enough to be still considered as a serious academic work.

We are taken on a wonderful journey along the timeline of history, and learn many interesting things on the way.

We are told he earliest conclusive evidence for human activity in this area is at Knowth, where there was a distinct phase of activity from about 3900BC to 3500BC. We are told there are over 600 decorated stones in the Boyne, representing two-thirds of all megalithic art in Europe.

The remains of one hundred people were found in the eastern tomb of Knowth, adults and children, most of whom were cremated before being deposited in the tomb.

Dr Stout also undertakes a very interesting study of place names in Brú na Bóinne from the ancient texts of Dindshenchas Érenn. In this conjectural study some of the sites in and around Newgrange are given interesting names, including Finn’s seat and Caiseal nOengusa.

We learn too that there is some doubt over whether St Patrick lit his famous paschal fire on the Hill of Slane and there is some suggestion he could have lit the fire in the Bend of the Boyne.

There are little gems of information to be found throughout the book, and some very interesting documents are brought to light, such as Bernard Scalé’s map of the Caldwell Estate from 1766, Lhwyd’s survey of Newgrange, the first known plan of the tomb, and even a public notice from 1882 detailing the prosecution of a person for defacing the Newgrange monument.

The book has received favourable reviews so far. Dr Julian Richards from BBC’s ‘Meet the Ancestors’, has said: ‘This is a wonderful publication – and one that makes me profoundly jealous as it is the sort of book that I would like to have written about Stonehenge and its landscape. I have to admit though, that Newgrange beats Stonehenge hands down when the cultural diversity of their respective landscapes are considered . . .’

From flax cultivation to currach making to emergency pillboxes to beaker pottery, this is a real ‘everything you ever wanted to know’ guide to the Boyne Valley. And it is much more besides.