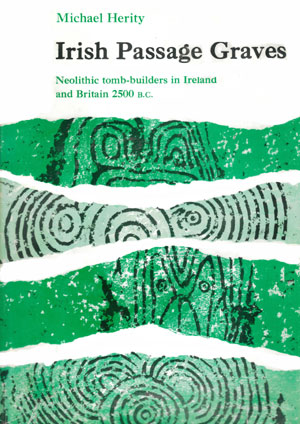 In 2,500 B.C. a Breton flotilla bore the builders of the passage graves into the Irish Sea. They had navigated from the Gulf of Morbihan and were first attracted by the island of Anglesey and by the Menai Straits, which reminded them of home.

It was in the richer lands of Ireland, however, that they finally settled. In the Boyne Valley this dynamic society founded a thriving economy and, within a few generations, built three magnificent tombs, each covering more than an acre. During this time the Boyne Valley township housed several thousand people.

Moving inland, they erected three hundred tombs, siting them on the summits of the highest hills. Today, these hilltop tumuli still strike the eye. Later generations arranged their cemeteries around the larger focal graves.

They ornamented their monuments with an alphabet of magical symbols, combining them in abstract patterns 'to enhance the impact of the architecture, sometimes representing shadowy human figures, male and female — the gods and goddesses of death — in stylized icons.

This book presents a description of the tombs, art, burials and grave-goods, and then attempts a reconstruction of the everyday life of their builders: subsistence, habitations, technology, even the industries of this remarkable people, the remains of whose civilization we call the Boyne Culture.

The Boyne Valley. The Loughcrew Cemetery. Keshcorran and Carrowkeel. Knocknarea and Carrowmore. Leinster, Anglesey and North Munster. Movement into Ulster.

WAS THERE A BOYNE CULTURE?

THE BOYNE CULTURE: ORIGINS and ACHIEVEMENT

Dr. Michael Herity is Lecturer in Celtic Archaeology at University College, Dublin. Before joining the college in 1961 he worked as a primary teacher and in Radio-Telefis Eireann. His research interests include the Irish Stone Age, prehistoric farming in Ireland and the history of Irish antiquarianism. Dr. Herity is Editor of the Journal of the Royal Society of Antiquaries of Ireland.