Knowth - Secrets from the grave 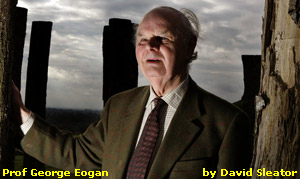 Nearly 50 years ago, archaeologists began excavating at Knowth near Newgrange - and the site has yet to give up all its secrets.

'The first day we went in, we went up the passage. When we got in towards the end, the passage became difficult, but there seemed to be a void at the top and I crawled up with a flashlight and walked until I came to the end of the passage.

"In my great excitement I jumped down six or seven feet, and to my amazement I found that what I had jumped into was a massive cruciform chamber. There was an astonishing amount of art and a magnificent stone basin in the right-hand recess."

Forty years ago, the bearer of the flashlight, archaeologist George Eogan, became the first person in centuries to see the underground passage tomb at Knowth in Meath, part of Brú na Bóinne (Bend of the Boyne), now a Unesco World Heritage site.

A year earlier, in 1967, the Knowth excavation had uncovered a smaller underground passage leading in from the western face of the megalithic mound, but this larger east-side tomb surpassed it, recalls Eogan, a professor of archaeology at University College Dublin.

"The western tomb was stunning but the east one was huge," he says. "I was always so impressed with Newgrange, I thought there could never be another one, and then to discover something somewhat bigger than Newgrange, this long passage. And it's a tribute to the builders that we were were able to enter both tombs on the moment of discovery. Here we were going into these tombs which were 5,000 years old and it was possible for us to enter." 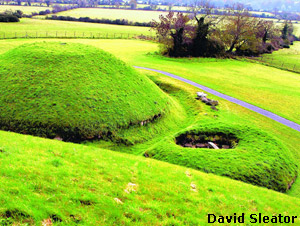 Knowth's charms had lain undiscovered for hundreds of years before excavations started on the site 46 years ago, with Eogan present. The fourth volume in a series of books on the dig's findings is published by the Royal Irish Academy later this month.

"We started at Knowth in 1962 and we have been there ever since," he says, detailing how the project has uncovered 18 satellite tombs around the great mound as well as unusual findings, such as a decorative flint macehead and a series of eight-century inscriptions within the passages and chambers.

But some of the findings pre-date all of that, explains Eogan. "We found evidence of pottery, houses and flint artefacts from a pre-passage-tomb stage of early Neolithic settlement around 4000 BC," he says.

"Then around 3000 BC there was an important transformation and the early Neolithic was replaced by the passage-tomb societies and they built their spectacular monuments."

The original mound at Knowth was ringed by a series of kerbstones, slabs of "greywacke" rock that was probably sourced and transported from several miles away, says Eogan. "I believe the passage-tomb society must have been very well organised, otherwise they simply could not have built those very large tombs."

But what really sets the stones apart is the art they bear, a series of angular and spiral inscriptions. "The art is fantastic. Knowth has the largest collection of megalithic art known," says Eogan. "I believe a lot of the art, maybe all of it, was done on site.

Sometimes it stops at ground level so I believe the stones had already been erected before the art was applied." And while it might be nice to look at, Eogan believes the art served more specific purposes too, marking rites of burial or celebration. "I believe some of it could be commemorative, it does occur within the tombs, like headstones. In addition I believe the kerb was a processional way, that people could walk around," he says, pointing out marks that could have served as signposts of sorts. 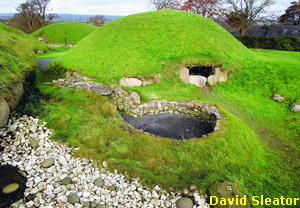 The art has survived millennia that saw great changes at Knowth. The site underwent a revamp around the eighth century AD when it became a protected settlement, the royal residence for the Brega kingdom, and some of the smaller satellite tombs were destroyed.

"A little village emerged then around the 10th and 11th century within the kingdom of Brega and that continued on until the arrival of the Cistercians and the Normans in the 12th century," says Eogan. "For this one site at Knowth, an enormous amount of new information has come to light and it has stimulated people to look at it from the historical point of view."

Part of that view is outlined by Dr William Jenkins, associate professor of geography at York University in Toronto, who examined records of landscape, ownership and the use of Knowth since the 16th century, when the Cistercians were dispossessed from land they were farming there.

The land - called "Miss Nancy's Moat" in early ordnance surveys - passed through families and continued to be used for agriculture, reflecting changing trends over the centuries, explains Jenkins.

With the discovery of Newgrange at the end of the 17th century, mounds such as Knowth became the subject of curiosity, he adds. "I guess people knew there was something extraordinary about it," he says. "And they wondered who had built these things but no one really thought of them as Irish heritage until the 19th century, as part of a wider national consciousness." By the early 20th century, tourists were a feature of the megalithic wonders of the Boyne region, leading to concerns over the preservation of Newgrange, but Knowth was largely left undisturbed, says Jenkins. Eventually the site passed to the State in 1939. Public access to Knowth is by guided tour only, starting from the Brú na Bóinne visitor centre near Donore, Co Meath.

The writing on the wall: ancient graffiti at Knowth 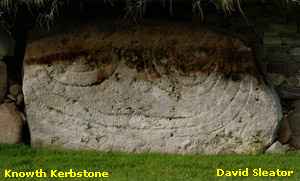 One of the quirkier discoveries at the megalithic site in Knowth is a series of inscriptions on stones that line the underground passages and chambers. A curious mixture of ogham scratchings and more modern "alphabetic" script, they seem to have been doodled around the eight century. But by whom and why?

"They are in fact vandalism or graffiti," says Francis J Byrne, professor emeritus of early Irish history at University College Dublin, who has studied the inscriptions in depth. "They date from a period when Knowth was in occupation as a royal site by early Irish kings of the Brega kingdom from around AD700 onwards."

Much of the writing details around 20 names, some rare and some common, of the writer's contemporaries, and forms one of the largest known hoards of historical graffiti, says Byrne. The ogham inscriptions are "scholastic", the type that might be used on manuscripts or scratched into the hilt of a knife, while the more alphabetic script is well formed, a hallmark of a trained writer.

"They are rather artistic. They are well written by someone who was obviously a literate scribe," says Byrne, noting that the vandal or vandals were Irish, and not Viking invaders. "In fact one or two of the inscriptions are written in a larger rounder form of the script, the type in the Book of Kells, it's very legible. And most of the others are in a longer, more angular type you find in the Book of Armagh."

The script's appearance and the variety of names suggest the graffiti artist(s) went to work between AD700 and 750, according to Byrne. Around this time the large mound at Knowth underwent a revamp as the royal residence, and the tombs were reopened as part of the settlement.

"It's amazing when you come across the inscriptions, there's something about them that brings you face-to-face with people," says Byrne. "If you met them, you would probably be telling them off, don't be desecrating this monument."

Historical Knowth and its Hinterland , edited by FJ Byrne, William Jenkins, Gillian Kenny and Catherine Swift, with an introduction by George Eogan, is volume four in the Excavations at Knowth series. Published by the Royal Irish Academy in association with the Department of the Environment, Heritage and Local Government.