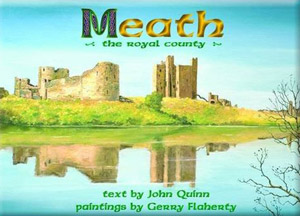 Meath: The Royal County by John Quinn with paintings by Gerry Flaherty. Meath treasures include the largest medieval castle in Ireland at Trim and the World Heritage megalithic tombs at Newgrange, Knowth and Dowth in the Boyne Valley. The book is a collaboration between well-known Ballivor author and former RTE radio producer John Quinn and Navan artist Gerry Flaherty, who provides a series of oil paintings.

This great Stone-Age burial-tomb dominates the Bend of the Boyne in the Valley of the Kings. We can only marvel at its construction and the amazing artwork on its stones. Who were its builders? Who was buried here? Why this location? So much is shrouded in mystery but it is clear that its location, design and orientation are directed towards the sun, marking in particular the winter solstice sunrise on December 21st. This huge mound, measuring approximately 12 metres in height by 100 metres in width, pre-dates both Stonehenge in England and the Egyptian Pyramids.

It is partially ringed with kerbstones, some of which are decorated. The entrance to the tomb is marked by a huge intricately-carved stone. The nineteen-metre long passage slopes upwards into a central chamber which has three recesses opening from it. The archaeologist M. J. O'Kelly began excavating Newgrange in 1962 but it was not until 1967 that he made the major discovery regarding the roof-box above the entrance. For a few days either side of the solstice, the rising sun's rays creep through the roof-box until they reach the centre of the chamber. This process takes nineteen minutes. Every year a privileged group gathers in the chamber at the winter solstice to witness this amazing spectacle. Spectacular photographs bear witness to the extraordinary skill of the builders of this mound five thousand years ago. They were skilful builders, manoeuvring huge wall and roof-stones into position.

They were marvellous engineers - the interior is still bone-dry today. And they were gifted astronomers, finding the perfect alignment of the solstice sun with their edifice. But the great mystery remains. Why? What was their purpose? This was almost certainly a tomb but for whom? Was it a temple of some kind? Was the solstice light meant to be a comfort for those buried within, a reassurance in the dark of winter that there was an afterlife? Did the Stone Age people worship a sun-god? The mystery remains. Inside the tomb as well as outside, the beautiful artwork enthrals us, notably the triple-spiral which has become the 'logo' of Newgrange. Again we must remember how primitive these artists' tools were. Was this art their language for expressing their belief in a sun-god? The arguments continue, as indeed they do over the re-construction that visitors see today. Whatever side they take, the visitors come in their thousands all year round to absorb the wonders of this World Heritage site. This is truly a sacred place.

It is a warm June day in 1995. I am at the prehistoric site of Knowth on the bend of the Boyne. I am here with historian George Cunningham to record a radio programme for the series The Mark of Man. We are joined by the great archaeologist Frank Mitchell, who lives just across the Boyne in Townley Hall. Come with us on our exploration of Knowth. George reminds us that we have not one but four stories here in Knowth — the first Stone Age settlers, Iron Age people from around 400AD, then an early Christian settlement and finally the coming of the Normans. We stand beside the huge central mound — ninety metres by eighty metres, reaching to a height of ten metres. It is surrounded by a ring of tall stones which feature carved spiral and crescent designs. "Remember," says Frank, "these fellows had no metal, so they would have chiselled these designs with quartz. And as for the passage-tomb, we're not talking about a heap of stones thrown roughly together.

The Stone Age settlers would have had the equivalent of modern quantity surveyors and architects. For the stone they needed prospectors and collecting parties. The quartz stones would have come from Wicklow and the granite from the Mournes..." Frank Mitchell worked on the original excavation with Professor George Eogan. It began in 1962 but it was not until five years later that Eogan discovered a cavity which led him down a twenty-metre passage and into a central chamber, where stood a lavishly carved stone basin, a metre in diameter. I ask Frank if he can remember the first time he entered the tomb. "It was difficult to get in there because the passage walls were collapsing. The Stone Age people had lit a lot of fires in there. The walls were covered in soot, but what astounded me was the discovery that later Christian settlers had drawn figures in the soot with their fingers. We could still make out their doodles."

There are seventeen smaller satellite mounds surrounding the Central Mound in higgledy-piggledy fashion. To my delight we are allowed enter one of them. We squirm and worm our way down the passage. There is no central or side chamber at the end but it is an extraordinary privilege to stand at the end of the passage in a Stone Age tomb. Outside, George reminds us that, mysteriously, there was no activity here for a couple of thousand years until the Iron Age people came, dug defensive ditches and lived on top of the mounds. "Later, the Normans came and found they had ready-built mottes to occupy. There's great continuity of history here". "Indeed," adds Frank. "Look over there. That's the corner-wall of a 17th century farmhouse. They pinched some of the big stones from the tomb to build it!"

Dowth is the most easterly of the three great Stone Age burial tombs in the Bend of the Boyne and while it was excavated as far back as the mid-nineteenth century, it is regarded as the Cinderella of the three tombs in terms of exploration. It comprises two passage graves - known as Dowth North and Dowth South - about twenty metres apart. Dowth North is a typical passage grave - a passage about twelve metres long leading to a central chamber with two side-chambers — and in this case two more small chambers off the right-hand side chamber. In Dowth South are many examples of passage grave art — various geometric designs pecked out with stone chisels by artists some five thousand years ago. What they signify is still a mystery, no more than the spiral designs (sunbursts?) on some of the huge kerbstones surrounding the mound outside. The plunder of the Danes in the ninth century would not have helped in solving the mystery.

Thanks to the great water-colourist Gabriel Beranger we know that in the 18th century the eccentric lord of these parts, John Netterville, built a sort of temple on top of the mound at Dowth. This glorified tea-room had 'a gallery which is to serve as orchestra', according to Beranger. The 19th century excavations put an end to the tea-room, however. Sir William Wilde records that a few hundred metres to the south-east of Dowth 'we have St. Bernard's Well; some remains of one of those structures denominated Giants' Graves; the old castle of Dowth; and the little church adjoining.' There is a further historic connection with the Nettervilles. In the early 19th century there existed a Netterville Institute for orphaned children. A teacher on the staff here was the father of John Boyle O'Reilly, poet, patriot and journalist. A member of the Fenian Brotherhood, he actually joined the British Army to recruit soldiers to Fenianism.

He was arrested in 1866 and imprisoned in Dartmoor. He escaped from prison, was rearrested and sentenced to penal servitude in Australia. Again he escaped by whaling ship and made his way to Boston where he became a very public figure and editor of the newspaper The Boston Pilot. Through the Pilot he campaigned against racism and anti-Semitism. He longed to return to the Boyne Valley and asked that he be buried under the spot where he had carved his initials on the wall of the old church at Dowth. He died and was buried in Boston in 1890, however, but the Dowth stone he had initialled was later brought to his tomb in Boston. His wish was granted and some fifty years later a monument was erected to his memory in the ruin of the old church in Dowth. It was said of John Boyle O'Reilly that 'Ireland gave him birth, England exile and America fame'.