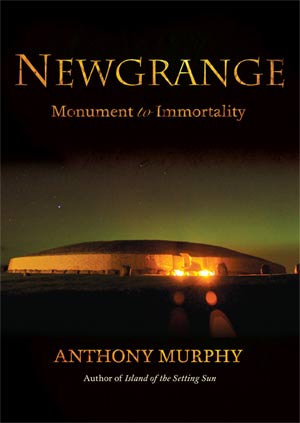 Newgrange - Monument to Immortality by Anthony Murphy looks beyond the archaeology and the astronomy to reveal a much more profound and sacred vision of the very spirit of the people who built Newgrange. Many people who visit the ancient and magnificent Newgrange monument in the Boyne Valley are driven by some deep longing to connect with their most distant roots. The giant 5,000-year-old megalithic construction evokes awe and wonderment, and a keen sense of melancholy for the community of people who created and fashioned it from stone and earth in the remote past, a people now lost to time.

For the past three centuries, archaeologists, antiquarians, writers and researchers have been probing Newgrange in the hope of revealing something about its purpose, and something about the mysterious people of the New Stone Age who created giant structures using primitive technology. What has become clear from these investigations is that Newgrange is a uniquely special place, and that its construction was carried out not by a grizzly mob of grunting barbarians, but rather by an advanced agrarian community who had developed keen skills in the sciences of astronomy, engineering and architecture.

In Newgrange: Monument to Immortality, writer and researcher Anthony Murphy goes deep into the mind and soul of his Neolithic ancestors to attempt to draw forth some answers to these questions. In a deeply moving, poetic and philosophical exploration, he looks beyond the archaeology and the astronomy to reveal a much more profound and sacred vision of the very spirit of the people who were driven to such marvellous and wondrous efforts.

Purchase at The Liffey Press


'This is an intensely personal, philosophical and spiritual investigation of Newgrange,' says the author Anthony Murphy.

'For many people, Newgrange is a powerful, magical place, and indeed the old mythology reflects its importance as a palace of the gods and as a portal between this world and the otherworld. I've tried to capture some of that magic in this book,' he said.

There is also a message for our troubled times in this book. 'Just like the Tuatha Dé Danann handed over control of Ireland to the invading Milesians, we have now ceded our power to European forces, as if repeating the stories from our most ancient mythology.'

But the message from Newgrange is one of hope. 'There is a sense that we need to retreat into the dark womb of Newgrange and to await the coming of the light. The message of Newgrange is an eternal one, which has survived all of the invasions and battles of history and prehistory. It reinforces the idea of the brevity of mortal life, but it also highlights the immortality of the human soul. Its builders might have been among the first to realise that something extraordinary happens at the edge of death, and many people who have had a Near Death Experience relate the sensation of travelling down a dark tunnel towards a brilliant light.'

Newgrange: Monument to Immortality is a wide-sweeping examination of many themes, which include cosmology and astronomy, spirituality, archaeology, philosophy and mythology. It is a heartfelt exploration of Ireland's greatest prehistoric treasure. It is both thought-provoking and reflective.


Anthony Murphy speaks about his book 'Newgrange - Monument to Immortality'