Secrets of the Stones - two part TV programme and book


Re-examining, re-defining and ultimately re-building Ireland’s most iconic ancient historical sites, Secrets of the Stones is a new two-part series that will change the way we view our island’s past. Our team of archaeologists, historians and forensic scientists have separated myth from truth to find out the secrets that lie beneath some of Ireland’s most ancient buildings. Using innovative, state of the art, feature-film technology, graphic designers have visually interpreted new findings on screen, bringing to life six of the country’s most historic sites. This type of technology and graphic design has never been seen on Irish television before.

Ireland is unique. Isolated on the fringe of the Atlantic it was the last place in Europe to be inhabited. Yet with 150,000 ancient monuments, it holds an unprecedented record of its prehistoric past, a record that has been largely obliterated elsewhere in Europe. Now, cutting edge science is slowly peeling away layers of the secrets lost in time and rewriting Ireland’s ancient story. The truth about our distant past is finally emerging.

There are gaps in our history that have never been explained. Can extraordinary new discoveries shine light on Ireland’s dark ages and finally give us some answers? The questions themselves are remarkable: were we almost wiped out 4000 years ago in a climate change event? Why did Ireland, unlike Europe, become Christian so quickly and change religion so peacefully? Have we discovered remains of a new structure on the Hill of Tara so vast that it rivals Croke Park in its footprint size? Are the religious symbols carved on the great mounds Knowth and Dowth proof that Ireland was at the centre of a great ancient European religion? By answering these questions we will hopefully help redefine our views of Ireland’s ancient societies, reshaping our knowledge of the past.

In this new two-part series, Irish scientists and archaeologist are now challenging the accepted story, and unravelling the enigma of Ireland’s most iconic historical sites. Consisting of two one-hour specials, Secrets of the Stones concentrates on telling the stories of a handful of key historical sites. Climate change, so much in the news today, was very much then as well. The series reveals how important natural climate change, was in our history, and how it can now be used to explain and answer some intriguing questions about how we changed as a society through the ages. 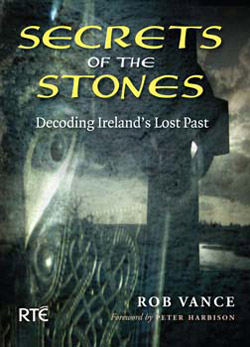 Using feature-film technology and high-end computer graphics to unlock the secrets of the past, these programmes bring six of our key sites to life as has never been seen before. Charting their interconnections, Secrets of the Stones looks at these iconic landmarks together as part of a wider cultural landscape.

Secrets of the Stones (Decoding Ireland's Lost Past) companion book based on the two-part TV series.

An extract from the second episode of RTE's Secrets of the Stones documentary series, profiling the use of RealSIM's simulation technology to re-create the site of an early 5th century Christian settlement in Caherlahillan in Co. Kerry, in Ireland.

An excerpt from RTE's Secret of the Stones documentary giving an overview of the 'Lost City of Clonmacnoise', Ireland first city and an important early Christian settlement at the crossroads of Ireland where the Eiscor Riada meets the Shannon.