The Meath Archaeological and Historical Society made written and oral submissions to An Bord Pleanala in relation to the N2 Slane Bypass proposal and representatives attended almost every day of the oral hearing inquiry. In their submissions, the Society outlined traffic safety, cultural heritage and planning concerns. In response to the Board's decision refusing permission for the bypass proposal as set out, John Clancy, Vice-President of the Society, stated:

“The needs of Slane, the HGV traffic issue and the Brú na Bóinne World Heritage Site are not mutually exclusive. Traffic safety in Slane is an urgent concern and we call on Meath County Council to implement immediately the ban on HGV traffic through Slane village and adjoining roads as the councillors themselves resolved in a motion passed on 9th April 2009. An Bord Pleanala did their job and have held the developers to account on this proposal which: (1) was clearly in contravention of the Meath County Development Plan 2007-2013, as voted by Meath County Council, and (2) did not adequately explore all alternative solutions to the HGV/traffic safety issue in Slane. This whole episode has been most unfortunate in that heritage and safety were unnecessarily pitted against each other. We would urge people to read not only the Board's decision in detail but also the accompanying inspectors' reports which clearly explain the reasoning behind the decision of the Board.” March 9th 2012.


In its detailed submission to the N2 Slane Bypass oral hearing in Drogheda (22nd February), the Meath Archaeological and Historical Society made the following key points for consideration by An Bord Pleanála:

The submission was presented on behalf of the Council of the Meath Archaeological and Historical Society by John Clancy, PRO. 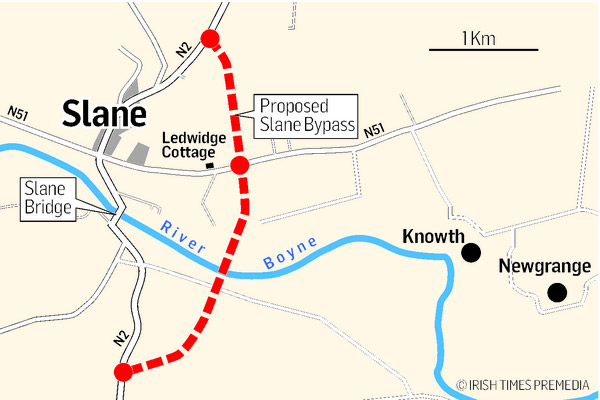