On Ancient Roads by Anthony Holten 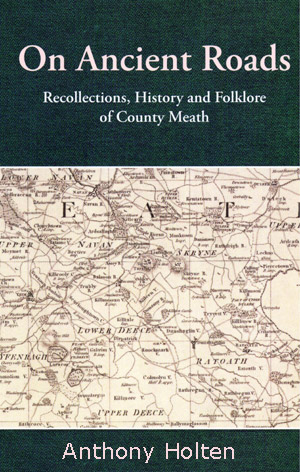 On Ancient Roads: Recollections, History and Folklore of County Meath by Anthony Holten.

On Ancient Roads is a lively tale which takes the reader on a journey through history and the radically changing landscape of County Meath. As in Tony Holten’s previous book 'Where Toll Roads Meet', the author describes the landscape as it was, highlighting what has been lost to ‘progress’. Illustrated with over 100 photographs and maps, the book traces the evolution of the road network, reflecting on a lost landscape that was once the crucible of ancient Irish culture.

The baronies, parishes and townlands through which the ancient roads from Trim to Duleek pass are richly adorned with historical sites, most notably Bective and the Boyne Valleys, Tara, Skryne, Lismullin and Blacklion. The narrative is drawn together from recollections, folklore and historical research, including an exploration of the Grand Jury records which provide a unique insight into the dubious machinations within that system of early governance.

Anthony (Tony) Holten was born near Tara in 1945. He travelled extensively during his marine engineering days in the Merchant Navy prior to continuing his career working on offshore oil and gas fields worldwide. He is the author of several books including A Stroke of Luck and Where Toll Roads Meet. He has three grown up children and, though he lives in County Cork, is a regular visitor to his native county.