First Light: The Origins of Newgrange 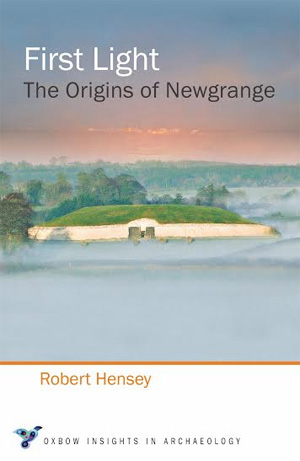 Newgrange is a world famous monument not only because of its vast scale and elaborate megalithic art, but also because of its renowned alignment to the sun on the winter solstice. Yet the origins of Newgrange remain somewhat mysterious. Across Ireland over two hundred similar passage tombs are found, some of which are considerably older than Newgrange.

These less investigated monuments reveal that the origins of Newgrange may be hidden in plain sight. A progression in the scale and sophistication of construction of these passage tombs, developments in the styles of megalithic art, and an increase in the scale and craftsmanship of associated artefacts may be observed, which taken together indicate a lengthy process of development. In short, Robert Hensey uncovers an untold history at Newgrange; an island-wide story of incremental changes over hundreds of years, of a society in evolution, perhaps in extremis, who left behind such a rich, enigmatic and patterned legacy.

The book not only charts the earlier history of Newgrange, but addresses why it was constructed, what was its purpose. In the Boyne Valley, through Newgrange and related sites at Brú na Bóinne, we have evidence not only of extraordinary physical accomplishments, but of tremendous acts of imagination; a testament to rich and developed inner worlds.

In First Light: The Origins of Newgrange, it is proposed that the concept of an otherworld which could be embodied by and accessed through passage tombs was a central motivator in passage tomb construction from its earliest beginnings. Newgrange is at the end of a long tradition of monuments dedicated to the religious needs of Neolithic communities, from small-scale monuments built by early farming groups; to potent otherworld centres of ritual training at the edge of society; eventually to temple-like monuments standing at the very heart of the religious and political sphere in Neolithic Ireland.

Challenging both orthodox archaeological opinions and popular conjecture, this will be an important book for anyone interested in Neolithic archaeology.

Robert Hensey received his PhD in archaeology from the National University of Ireland, Galway. He specialises in the monuments and societies of the Irish Neolithic with particular reference to passage tomb chronology, art and religion.

Review of First Light: the origins of Newgrange

Newgrange is an Irish national icon much in the same way as Stonehenge is in the UK. In this book, Robert Hensey takes a fresh and exiting approach to the site, building on existing data but focusing much more comprehensively on where this exceptional monument has come from. He carefully contextualises Newgrange through the study of other Irish passage tomb cemeteries, in particular the dramatic new results of the Carrowmore dating project, which imply a much earlier date for the commencement of passage tomb construction in Ireland than was hitherto realised, and explores the implications for the ultimate construction of the mega-tomb of Newgrange.

Drawing widely from anthropology, ethnography, archaeological theory, and the latest archaeological data, Hensey makes bold suggestions challenging long-held truisms. The text is open, accessible, and well illustrated throughout, and moves the discussion about Newgrange to a new level by focusing on the monument's long and involved gestation. A very welcome addition to the Newgrange corpus, this book will help to set the agenda for the discussion of the monument for the foreseeable future.

Extract from the Introduction

Newgrange is one of an elite group of monuments around the world which could be considered archaeological celebrities: sites such as Stonehenge and Machu Picchu, for instance. Monuments of that order were not only of immense importance in the past, but continue to resonate in the present, and presumably will into the future too; they seem to insist on holding a place in our consciousness.

Newgrange takes pride of place in documentaries about Ireland, in countless academic and popular books, national tourism campaigns, and so on. Yet even though Newgrange is fêted in the media and in academic works, somewhat surprisingly, there is something of an absence when it comes to knowledge of its origins. One might be forgiven for concluding that Newgrange and its sister sites Knowth and Dowth arrived fully formed. In most accounts, when the question of its origins are broached, similar tombs in mainland Europe, especially older passage tombs in Brittany and Iberia, are referenced. Yet, as discussed below and over the course of this book, continental passage tombs cannot quite account for the unique expression of passage tomb construction and ritual found in Ireland and at Newgrange.

A close examination of the passage tombs of Ireland, however, reveals that the je ne sais quoi of Newgrange may in fact lie hidden in plain sight. Across this island, one can observe increases in the scale and sophistication of passage tomb construction, developments in the styles of megalithic art, advancements in the scale and craftsmanship of the artefacts associated with the monuments, etc., which, taken together, indicate a lengthy process of development.

In short, there is an untold history at Newgrange – an island-wide story of incremental changes over hundreds of years, of a society in evolution, perhaps in extremis, which left behind such an enigmatic, rich and patterned legacy.

This book presents those developments, that unfolding, examining the factors which ultimately gave rise to Newgrange. Yet, unlike the tourist with limited time who hurries into Newgrange soon after parting with their ticket fee, our journey to Newgrange will be more considered. Like the famed river which surrounds the Boyne complex, we will approach the monument slowly, weaving a path from a distance. We begin with recent evidence regarding the earliest known Irish passage tombs.

A series of new dates from the monuments at Carrowmore, Co. Sligo and other evidence demonstrate that some passage tombs in Ireland were in use long before Newgrange was built. This new chronological context creates a platform from which we can cast our eyes over the developmental history of passage tombs on this island, and thus begin to piece together the deep history of Newgrange for the first time.

The origins of Newgrange are not just about dates and older sites, the kind of debates beloved by archaeologists, but about what motivated people. Our purpose will not only be to chart the back-history of Newgrange, but to attempt to discern why it was constructed, what was its role? An answer to this question might also be contained in the developmental history of the passage tomb tradition. In the Boyne Valley through Newgrange, we have evidence not only of extraordinary physical accomplishments but of tremendous acts of imagination, a testament to rich and developed inner worlds. An interest in an otherworld, which could be embodied by and accessed through passage tombs, may have been a central motivator in passage tomb construction from its earliest beginnings. The limited scale of the first passage tombs – simple monuments with chambers of only five or six stones covered with a large boulder – suggests they were primarily constructed for the deposition of human bones (rather than for internal ritual). Their coastal location may hark back to real or mythic places of origin, over the sea, to the world from which genealogical ancestors came, or perhaps to a land of the dead, a mystical otherworld over the horizon.

Later, larger more sophisticated passage tombs were constructed, with carefully constructed lintel-topped passages which led to sizeable inner chambers. These developments allowed engagement with other worlds to go one step further. Through occupying the same space as the bones of their forebears, select individuals could now physically enter the otherworld, the realm of the ancestors. There, they created and interacted with powerful abstract symbols carved into stone. The individuals who entered the darkened chamber may have been imagined as having been transformed by the experience. At some monuments, at significant points in the solar calendar, they shared the internal space with beams of sunlight. They were introduced to spiritual powers, and perhaps trained in ritual and spiritual techniques. Here it is proposed that this otherworld religion, centred on emotionally intense events experienced by individuals who spent time in passage tomb chambers, was at the very heart of the passage tomb tradition in Ireland.

Over time, this religious movement, which had been growing and changing over the Neolithic, began to take a central place in society. It is from this tradition that Newgrange and similarly ambitious monuments eventually arose. That most spectacular flowering of passage tomb construction saw the erection of a small number of massive structures with a peculiarly public focus, together with a distinct change in the role of the monuments. At Newgrange, celebrations connected to the return of the sun at the winter solstice may have been mirrored in the outer landscape by the return of spawning salmon to the Boyne River and other potent indicators of the revitalisation of the natural world. Concerns about the harvest, worsening climate, the need to construct ever greater monuments to venerate the ancestors, and the ability of spiritual and political leaders to negotiate with otherworld powers may have become crucial at this time.

This otherworld-focused religion became central to Boyne Valley communities, transcending its creators, arguably surpassing and outliving their many other achievements. It is extraordinary that this population could invest so much energy and imagination into their creative vision. By the end of the fourth millennium BC, so much of this society's efforts were being poured into ever greater monuments that, between the gathering of materials from the wider landscape, construction and ceremony, these sites must have consumed much of peoples' day-to-day lives. It is this religious evolution, the journey to Newgrange, which is considered in this book.