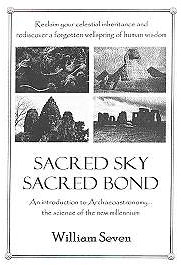 “As our early ancestors repeatedly observed the infinite majesty of the heavens, they imagined the possibility of something greater than themselves supervising its harmonious regularity.” Seven practices Archaeoastronomy (a science that combines archaeology, anthropology, astronomy and mythology in a way that reveals long lost secrets and misunderstood historical events) to examine the sociological development of humanity.

He begins with pre-Ice Age civilizations and establishes that celestial/earth awareness was crucial to survival. Seven asserts that Ice Age homo sapiens learned to use the sky as a tool for survival and that their knowledge enabled them to survive while Neanderthals slowly disappeared.

“The way we track time; the cardinal directions of north, south, east and west; the invention of the calendar; religious holidays such as Easter and Christmas; the concept of angels; our religious institutions—all have their origins in the cycles of the heavens, the earth and its seasons,” Seven writes. “It is accepted that the practice of incorporating these cycles for practical and ceremonial purposes started long before the invention of the written word.”

Homo sapiens’ knowledge of the sky began with baby steps. The first astronomers began to make connections between the moon, sun, stars and seasons. They learned they could predict spring and winter. They learned when to plant and when to gather.

“With the bond between heaven and Earth made, it was not long before another leap of consciousness was made,” Seven wrote. “A vision that something greater than themselves was responsible for the order of the world. Some force oversaw the care of trees, the water, the mountains and the skies. The concept of heavenly and earthly spirits was forming in the minds of early humans.” This basic knowledge developed into more complex societies, where those at the top were believed to have direct connections to the heavens. 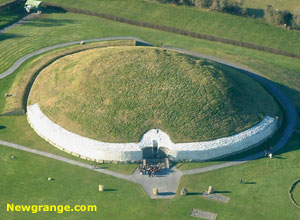 “Through divine authority granted by the heavens, the world’s pharaohs, emperors, kings, queens and religious institutions began considering themselves celestial representatives on earth,” Seven writes. “For rulers to create credible empires, it was necessary to commune with the gods and interpret the celestial cycles that established their divine authority on Earth. Therefore, it was essential that each kingdom built structures that granted them access to the sky.”

The oldest known Archaeoastronomical site is Newgrange in Ireland. But perhaps Stonehenge on the Salisbury Plain in England is the best known. Other structures built to connect the heavens and earth include the pyramids on the Giza plateau in Egypt; the pyramids and observatories of the Maya, Inca and Aztecs in Central and South America; and the Indian civilizations of the US. 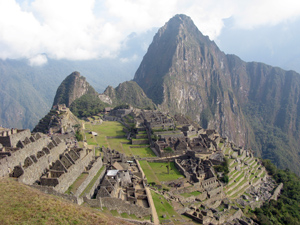 "It is now accepted throughout the scientific world that these incredible monuments to man’s ingenuity were inspired and designed by peoples’ vision of the cosmos, their need to interpret and commune with the gods and were solely constructed by humankinds’ manual labor and sheer willpower,” Seven writes. “Every culture on our planet looked to the heavens as a wellspring of enlightenment. Early humans used the heavens to create a stable existence.”

He argues that humanity lost that knowledge of the heavens because religious zealots labeled it as pagan. “In 1582 many Protestant reformers began to consider winter festivals as frivolous pagan rituals and banned them all,” Seven writes.

“Even though the legend of Saint Nicholas appeared as early as the 10th century in Germany, Normandy and northern Italy, Protestant reformers said it was nothing more than ancient Celtic and Gaelic traditions disguised as Christianity. It was not until 1703 that pagan Christmas celebration was once again deemed acceptable.

“Later in the 19th century, the Puritans again outlawed Christmas in Boston for the same reasons. Schools and business were open and people were fired if they refused to go to work in order to observe the winter solstice holiday. “These are just a few examples of how religious authorities and their belief systems are continually in a state of transformation. Forgetting the truth of their origins, the cycle of subtle persecution of others begins again.

“History and the Bible are filled with stories and examples of our astronomical heritage,” he continues. “Tragically, the church purposely and systematically suppressed many of these celestial connections and traditions as pagan astrology.”

Seven goes on to discuss the coming “New Age” and explain the concept of the Grand Precession. It takes about 25,920 years for the Grand Procession to complete one revolution. Divide that into 12 and you get the Great Ages—each named for one of the 12 zodiac signs. Each Great Age lasts an average of 2,160 years, but it varies based on how large the zodiac sign is (see Clockwork of the Great Ages below).

We are currently in the Age of Pisces, which is diminishing and the Age of Aquarius is dawning. Calculating the beginning and end of each Great Age is not an exact science—it depends on which calendar you use to do your calculations. Some assert that we have already entered the Age of Aquarius, still others say it will not dawn until the year 2437. Seven says humanity not only lost its connection to the skies because of religious zealots, but also the night skies are vanishing because of society’s attempt to turn night into day.

“Tragically, our societies are unknowingly destroying this international treasure,” he said. “One that is as precious as any other. As you know, people get behind causes such as saving the whales and the rain forest. And, as important as these causes are, scientists around the world have discovered saving our skies from air and light pollution is just as urgent. Why? “Considering the fact that the heavens represent the one tangible unifying bond beyond the genetic link that makes us all one family, I think it’s time we recognized the very real necessity of saving our sacred skies.

“Simply put, since the dawn of modern humans, our ancestors have shared the skies as a common bond beyond the genetic link that makes us all one planetary people. “Every culture on our planet looked to the heavens as a wellspring of enlightenment to create culture, society and spirituality. The sacred sky is a planet-wide cultural treasure that must be respected, protected and preserved. “I hope you’ll join the growing numbers of those who have realized, one need only look up . . . to see the light.”

Seven, who is the chairman of the Starhenge Steering Committee asserts that conscientious adults have a responsibility to re-educate youth and help humanity rediscover the “forgotten wellspring of human wisdom” available in the heavens. “The world is what we make it,” Seven writes. “If we believe that stopping soil, groundwater and air pollution will help give our children a chance for a substantial future, then this will be the fate of our planet—but only if we act upon it.”