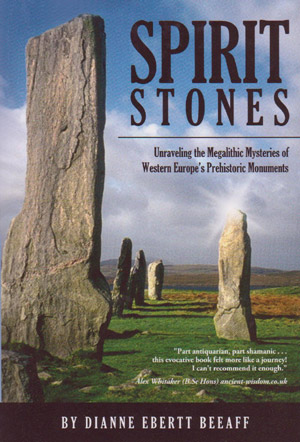 Spirit Stones is a meticulously-researched work which unearths society’s ancient lessons; their secrets long-buried in the relics of the Neolithic Era and Bronze Age civilizations. Sharing both the pragmatic and spiritual significance of Western Europe’s prehistoric stone monuments, stone circles and burial chambers, Beeaff challenges readers to reflect on humanity’s common ancestry, culture and connection. “Spirit Stones has been, for me, a journey through some of the most powerful places in our civilization’s history,” she says. “When we stand and reflect in many of these places, as I have been privileged to do, they inspire us to live more fully in the present, to capture and apply the powerful concentration of life they express.”

Both a history lesson and a modern-day guide to what the author refers to as “Spiritual Fitness,” Spirit Stones captivates readers with a unique metaphysical perspective. Providing insight into the contemporary relevance of ancient monuments like Stonehenge, Castlerigg, and Callanish, Beeaff makes masterful connections between timeless generations of humanity, leading willing participants on a quest both grounded in stone and spiritually transcendent. “In the standing stones and prehistoric burial chambers of our past,” she explains, “we have mystery and message on many levels. Through them, we can rediscover the inexhaustible, multifaceted, and wonderfully divine existence that is the life in all of us.”

Excerpts relating to the Boyne Valley

"East of Slane Hill in the Irish Republic, the River Boyne makes a loop to the south. There, in the semi-circle it forms, are three great glacial mounds that support the massive Neolithic chambered tombs of Dowth, Knowth and Newgrange. The most famous of these, Newgrange, dates to about 3200 BCE and has a corbelled roof that has been watertight for more than 5000 years. Newgrange had a massive, white-stone facade -- now reconstructed -- that glistened under both the sun and the moon and could easily be seen from many miles away. When I was there in 2007, the wet weather suddenly cleared to a deep blue sky filled with sunshine and high, wind-rushed clouds. The mound, once covered with stones, is now green and grassy, but its brilliant white-quartz frontage gleamed as ever in the sunlight. Even in a bank of Irish mist, it could never have been very well hidden."

"But in the same way that Heaven and Earth were likely considered intrinsically connected for the agricultural societies of our prehistoric past, so, too, were light and darkness. Ireland's Newgrange is certainly one of the most dramatic examples of this. Facing southeast on the summit of a low hill this magnificent passage tomb looks out on the lush Boyne Valley. Anyone fortunate enough to be inside on the morning of the Winter Solstice (December 21) will see the first rays of the rising sun filter through a gap in a roofbox above the entrance, gradually moving down the passageway to illuminate the dark central chamber. Well before the rediscovery of this roofbox, it was said that sunlight penetrated the passage on certain occasions and focused on the tri-spiral stone in the end chamber."

"Irish accounts tell us that the goddess of the River Boyne -- Boand -- lived in Newgrange, a burial mound within the ancient site of Bru na Boinne. According to myth, the Celtic solar deity known as The Dagda stole inside and impregnated Boand, who then gave birth to Óengus, the Irish god of love. In the Irish Fenian Cycle, the warrior Finn describes Newgrange as the "house of Óengus of the Bru." Incidentally, the Irish king Cormac mac Airt, a convert to Christianity, refused to be buried there. Given the monuments position as a pre-Christian cemetery, perhaps he feared some divine retribution in the afterlife.

Newgrange is aligned to the Winter Solstice sunrise. It seems fitting then that Newgrange became the home of Óengus, whose father, at Óengus' conception, was said to have made the sun stand still for the nine months prior to his son's birth. Eternally youthful, Óengus is thus known as a solar deity who personifies the day. The son/sun of the New Year is born of Mother Earth at the lengthening of days. Nearby Knowth is connected with Englec, Óengus' lover. While at Dowth, believed to be the oldest passage tomb of the Bru na Boinne, the druid Bresial tried to build a Babel-styled tower to reach heaven. Notably, Dowth is sometimes referred to as Sid Bresial, "sid" denoting a dwelling place of gods."

A native of Kitchener, Ontario, Canada, Dianne Ebertt Beeaff has traveled the world extensively and combines a lifelong love of history with a quest for present-day understanding.

An acclaimed artist and writer, Dianne has authored two works of nonfiction— 'Homecoming and A Grand Madness, Ten Years on the Road with U2'. Her award-winning first novel, 'Power’s Garden', was published in 2009; her poetry, watercolors, graphite sketches and magazine articles have been featured for decades throughout the United States and Canada.

Bringing Western Europe’s monolithic architecture to the contemporary forefront, Spirit Stones reflects both the richness of Dianne’s professional writing and her personal thirst for knowledge and spiritual growth. She and her husband, Dan, reside in Tucson, Arizona and are the parents of two.