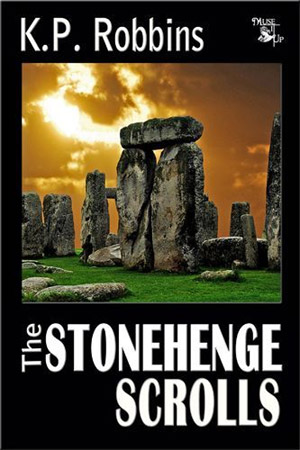 The historical novel The Stonehenge Scrolls says that Irish builders designed Stonehenge. The author K.P. Robbins writes that a guild of monument builders trained at Ireland’s Newgrange and then traveled the British Isles to supervise construction of ancient sites, including Stonehenge.

Robbins, who calls herself a “stone chaser,” noted similarities among the many stone circles, cairns and tombs she has studied in England, Ireland, Scotland, Wales and Brittany over the years, which led her to the Irish builders theory. She writes in 'The Stonehenge Scrolls', “Even though not at all centrally located at the very western edge of Europe, Newgrange was the center of the action in Neolithic times, as evidenced by the wealth of beautifully carved stones there and at nearby Knowth and Dowth in the Boyne Valley. Several centuries older than the stone circle at Stonehenge, Newgrange hints that the Irish may have started western civilization, not just saved it.”

Both Stonehenge and Newgrange are World Heritage sites, but archaeologists say the latter is at least 500 years older. At Newgrange, located north of Dublin, a huge burial mound covers a passageway leading to an interior room large enough to hold 20 people. During the winter solstice sunrise and only then, sunlight travels down the passage and illuminates the interior. If that sounds like something from a Hollywood movie, keep in mind that Newgrange was built over 5,000 years ago. Stonehenge is also aligned to a solstice, although there is some disagreement as to whether it’s the summer solstice sunrise, as modern-day Druids claim, or the winter solstice sunset.

Robbins wrote the first draft of 'The Stonehenge Scrolls' while living in Ireland near another noted archaeological site, Carrowmore in County Sligo.

Who built Stonehenge? Over four thousand years after it was built, Stonehenge continues to intrigue, attracting a million international visitors every year. Now ancient scrolls unearthed near Dublin reveal the secrets of Stonehenge and an archaeologist blogs about their meaning in this compelling e-novel. Based on known archaeological discoveries, The Stonehenge Scrolls spins a tale that could just possibly be true.

Myrddin, a kind of prehistoric engineer, supervises the hauling of giant stones that will be used to build a new monument at the Sacred Circle, an astronomical site long revered by the five clans in the territory. He also fathers a daughter, Sulis, born on the day the sun rises highest in the sky.

Her auspicious birthday foretells greatness, and Myrddin becomes smitten by the little girl with red hair, the sign of a Monument Builder. The precocious Sulis learns about the healing qualities of plants from her grandmother Ogwyn, the clan medicine woman, and cures the impetuous young chieftain Gwyr. But she has her own ideas when it comes to the Sacred Circle.

Is the oral history recorded in the scrolls plausible? In alternating chapters of The Stonehenge Scrolls, archaeologist Maeve Haley’s blog cites the evidence and speculates on the meaning of Stonehenge.

“A fine saga, The Stonehenge Scrolls is driven by drama and tight, involving writing and is a pick for any who enjoyed Auel's 'Earth's Children' series and similar historical novels.” --Midwest Book Review.

Author K.P. Robbins has studied stone circles, dolmens and cairns in England, Scotland, Wales, Brittany and Ireland. “The first time I saw Stonehenge, I was hooked,” she says. “In my travels I met many people also fascinated with Neolithic stone monuments. I hope The Stonehenge Scrolls not only appeals to them but also attracts new interest in Stonehenge.”

Excerpt from the Introduction to The Stonehenge Scrolls

From The Washington Press: IRISH CLAIM TO DISCOVER SECRETS OF STONEHENGE

Ancient scrolls revealing the mysterious history of Stonehenge have been discovered in Ireland.

“We have discovered the only written record of what was apparently a longstanding oral tradition,” Haley said, “and we plan to assess the details of this storytelling against the known archaeological facts.”

When informed of the Irish discovery, leading British archaeologist Nigel Moore expressed skepticism. “Even if the document is authentic, and that’s yet to be determined in my opinion, it would have been written thousands of years after Stonehenge was built, which leads one to question its accuracy.”

The National Exploration Society, which is funding the effort, released the following translation of the introduction to the scrolls:

“I, Oisin, am the last of our priesthood. The profane Romans have killed all my fellow priests and novices. Only I remain here on this island, with just a shallow river separating me from the advancing Roman soldiers.”

Haley has surmised that Oisin was a Druid priest on the island of Anglesey in Wales, where the Romans killed off the Druids in the First Century A.D. Latin was the official written language in Britain at that time because of the Roman occupation. Although the Romans chased Britain’s Druids to Anglesey, they never ventured to Ireland. Haley pointed out that ferries today still travel across the Irish Sea from Anglesey to the area south of Dublin where the scrolls were found.

Confirming the fact most archaeologists debunk the Druid connection to Stonehenge, the Druids appeared on the scene centuries after Stonehenge was built—Haley speculated, “Perhaps the Druids who recited the stories in these scrolls were actually the descendants of the Stonehenge builders.”

Haley acknowledged Stonehenge was built in phases over many centuries, beginning with a circular earthen bank and ditch about 3000 B.C. At first, wooden structures were built there. Fast-forward another four hundred years or so, and stone columns began to be erected within the earthen circle, first some bluestones which were later removed. Finally, around 2500 B.C. the rimmed stone circle of thirty twenty-five-ton uprights was built to surround a horseshoe-shaped arrangement of five ‘trilithons,’ each consisting of two giant stones weighing as much as forty tons, topped by a third stone weighing fifteen tons. In a final building phase extending over several centuries, a smaller bluestone circle and horseshoe were added inside the larger structures.

“However,” Haley said, “what most people today think of as Stonehenge, the rimmed stone circle surrounding the five trilithons, could have been built in one person’s lifetime, given the available manpower and technology of that time. Why and how this construction took place is the story told in these scrolls.”

Reporters pressed Haley for more details on the contents of the scrolls, but she would say only that they are written as if spoken by the four main characters, and these monologues may have once been performed as a means of teaching the Druids their history.