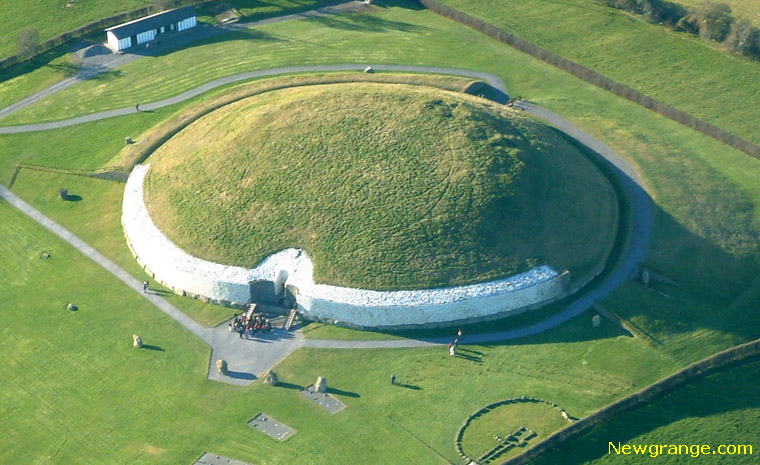 Newgrange is a 5,200 year old passage tomb located in the Boyne Valley in Ireland's Ancient East.

A passage measuring 19m (62ft) leads into a chamber with 3 alcoves. The passage and chamber are aligned with the rising sun on the mornings around the Winter Solstice.

Newgrange is surrounded by 97 large stones called kerbstones some of which are engraved with megalithic art; the most striking is the entrance stone.

Access to the Newgrange monument is via the Brú na Bóinne Visitors Centre.

Newgrange is a Stone Age (Neolithic) monument in the Boyne Valley, County Meath, it is the jewel in the crown of Ireland's Ancient East. Newgrange was constructed about 5,200 years ago (3,200 B.C.) which makes it older than Stonehenge and the Great Pyramids of Giza. Newgrange is a large circular mound 85m (279ft) in diameter and 13m (43ft) high with a 19m (63ft) stone passageway and chambers inside. The mound is ringed by 97 large kerbstones, some of which are engraved with symbols called megalithic art.

Newgrange was built by a farming community that prospered on the rich lands of the Boyne Valley. Knowth and Dowth are similar mounds that together with Newgrange have been designated a World Heritage Site by UNESCO.

Archaeologists classified Newgrange as a passage tomb, however Newgrange is now recognised to be much more than a passage tomb. Ancient Temple is a more fitting classification, a place of astrological, spiritual, religious and ceremonial importance, much as present day cathedrals are places of prestige and worship where dignitaries may be laid to rest.

Newgrange is a large kidney shaped mound covering an area of over one acre, retained at the base by 97 kerbstones, some of which are richly decorated with megalithic art. The 19m long inner passage leads to a cruciform chamber with a corbelled roof. The amount of time and labour invested in construction of Newgrange suggests a well-organized society with specialised groups responsible for different aspects of construction.

Newgrange is part of a complex of monuments built along a bend of the River Boyne known collectively as Brú na Bóinne. The other two principal monuments are Knowth (the largest) and Dowth, but throughout the area there are as many as 35 smaller mounds. 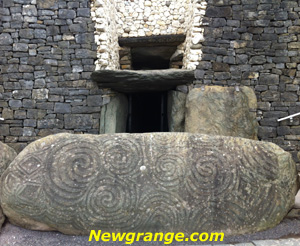 Immerse yourself in the rich hertiage and culture of the Boyne Valley with our full-day private tours. Visit Newgrange World Heritage site, explore the Hill of Slane, where Saint Patrick famously lit the Paschal fire. Discover the Hill of Tara, the ancient seat of power for the High Kings of Ireland. Book Now 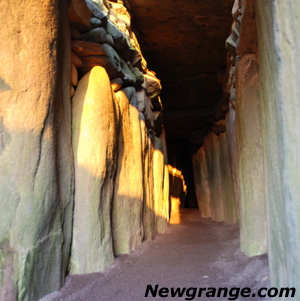 Newgrange is best known for the illumination of its passage and chamber by the winter solstice sun. Above the entrance to the passage at Newgrange there is an opening called a roof-box. This baffling orifice held a great surprise for those who unearthed it. Its purpose is to allow sunlight to penetrate the chamber on the shortest days of the year, around December 21st, the winter solstice. At dawn, from December 19th to 23rd, a narrow beam of light penetrates the roof-box and reaches the floor of the chamber, gradually extending to the rear of the chamber.

As the sun rises higher, the beam widens within the chamber so that the whole room becomes dramatically illuminated. This event lasts for 17 minutes, beginning around 9am. The accuracy of Newgrange as a time-telling device is remarkable when one considers that it was built 500 years before the Great Pyramids and more than 1,000 years before Stonehenge.

The intent of the Stone Age farmers who build Newgrange was undoubtedly to mark the beginning of the new year. In addition, it may have served as a powerful symbol of the victory of life over death.

Each year the winter solstice event attracts much attention at Newgrange. Many gather at the ancient tomb to wait for dawn, as people did 5,000 years ago. So great is the demand to be one of the few inside the chamber during the solstice that there is a free annual lottery (application forms are available at the Visitor Centre). Unfortunately, as with many Irish events that depend upon sunshine, if the skies are overcast, there is not much to be seen. Yet all agree that it is an extraordinary feeling to wait in the darkness, as people did so long ago, for the longest night of the year to end.

Immerse yourself in the rich hertiage and culture of the Boyne Valley with our full-day private tours. Visit Newgrange World Heritage site, explore the Hill of Slane, where Saint Patrick famously lit the Paschal fire. Discover the Hill of Tara, the ancient seat of power for the High Kings of Ireland. Book Now