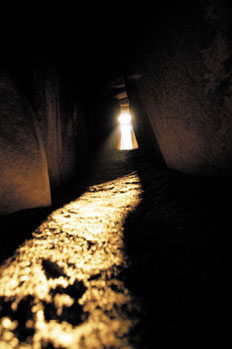 Newgrange is best known for the illumination of its passage and chamber by the winter solstice sun. Above the entrance to the passage of the Newgrange mound there is a opening called a roof-box. On mornings around the winter solstice a beam of light penetrates the roof-box and travels up the 19 metre passage and into the chamber. As the sun rises higher, the beam widens so that the whole chamber is dramatically illuminated.

The Winter Solstice webcast from Newgrange was broadcast on the mornings of Friday 21st and Saturday 22nd December 2007. The conditions were excellent on the morning of the 21st, the rising sun illuminated the passage and chamber between 8:58am and 9:15am GMT (Greenwich Mean Time). On the morning of the 22nd the rising sun was blocked by a low bank of cloud, the sun cleared the cloud by 9:30am, too late to illuminate the chamber.

An article by Noelle Jennings, printed in the Meath Chronicle in December 2007.

A clear frosty morning ensured perfect conditions at Newgrange last Friday morning as the sun illuminated the chamber of the world-famous megalithic tomb on the 40th anniversary of the discovery of the phenomenon. It was on the 21st December 1967 that Professor Michael O'Kelly discovered the spectacular phenomenon for the modern world when he witnessed the sunlight creep through the roof box and light up the burial chamber of the 5,000-year-old tomb.

Professor O'Kelly's three daughters, Helen, Ann and Eve, were invited along to witness the illumination for themselves on the 40th anniversary of the moment their father stood in the chamber and witnessed the spectacle. It was an emotional and moving experience for them as they recalled their late father going to Newgrange 40 years before and the impact of his discovery on archaeology.

This year, the ancient site was introduced to the latest in technology so that the winter solstice spectacle was broadcast live on the internet to hundreds of thousands of people all over the world. However, such was the demand to view the solstice, too many hits meant not everybody was able to access the webcast and many were left disappointed.

She said the conditions on the shortest day of the year "couldn't have been better" and were "perfect". Ms Tuffy said it was a glorious morning and that everything had gone according to plan, other than the glitch with the webcast. However people from as far away as New Zealand had phoned the centre to tell them they had seen the webcast "loud and clear".

There were 20 people inside the chamber on Friday morning, including Ministers Noel Ahern and John Gormley, Professor O'Kelly's daughters and winners in the annual lottery to pick the lucky few who get inside the chamber to witness the phenomenon. 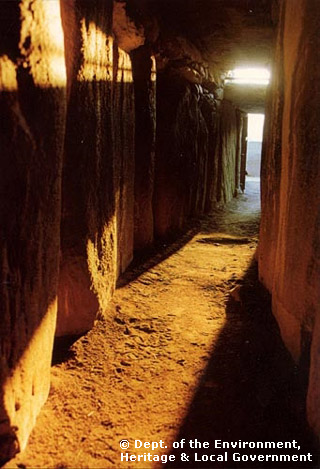 Outside the megalithic monument, around more than 200 `dawn watchers` had been gathering from the very early hours to wait for the sun to come up over the hill on the far side of the Boyne Valley and, this year, they got to see the spectacle as it was broadcast on the large screen erected outside.

From 8.58am to 9.15am, the winter sun shone through the roof box beginning with a small shaft of light that culminated in the full illumination of the chamber. These were many regular `watchers` who gather at Newgrange every year to experience the dawn on the winter solstice, a sacred time for our megalithic ancestors.

Others in the burial chamber on Thursday morning included members of the public whose names were drawn in a raffle for places in the tomb during the solstice period. This year, the lottery members were Irish but over the course of the six days when the sun illuminates the tomb, people from Canada, Texas, Missouri and other places around the world travelled to Meath especially for the experience.

The solstice phenomenon doesn't just occur on the shortest day of the year but for a number of days either side of the date and `dawn watching` takes place for a total of six days when members of the public who won their places in the draw conducted earlier in the year are permitted to enter the passage tomb.

The Central Bank of Ireland have issued a Newgrange Coin Set. Newgrange is the theme for the 2008 uncirculated Coin Set, the sixth and final mint set in the 'Heritage of Ireland' series. The set was officially launched on 21st December 2007 following the Winter Solstice at Newgrange. The cost of the Newgrange Coin Set is €24 plus postage. More...